THE CANDIDATE: WHAT IT TAKES TO WIN - AND HOLD - THE WHITE HOUSE 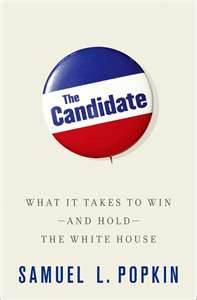 Superior, Wisconsin native, Samuel Popkin, and author of The Candidate: What It Takes to Win - and Hold - the White House explains the behind the scenes intricacies of what goes on inside a campaign, and what makes one succeed while another fails.

Reflecting on his own experience of playing the role of Ronald Reagan in Jimmy Carter's reelection campaign, he talks about the 2012 debates and the different strategic approaches between incumbents, challengers and successors.  This program is peppered with personal tales including the importance of having "the Nancy influence" at play in every Presidency.
by Carol Koby at 5:11 PM