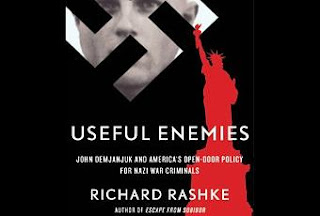 
After writing ESCAPE FROM SOBIBOR, Richard Rashke's publisher asked him to write about the infamous case of Sobibor guard, John Demjanjuk.  In following that story, Rashke uncovered a revealing account of how America dealth with Nazi war criminals and their World War II collaborators. Both stories are meticulously woven together in this recently-published book.
by Carol Koby at 12:14 PM