MY LIFE WITH EPILEPSY 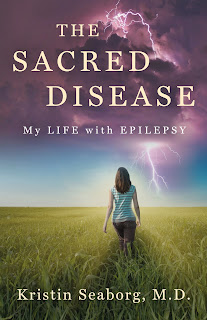 What is it like to live with epilepsy?  One in 26 people know as that is how many will develop epilepsy at some point during their lifetime.  Epilepsy affects over 3 million Americans of all ages.  In America, epilepsy is as common as breast cancer.

On this program, Kristin Seaborg, a pediatrician, parent, and advocate for epilepsy awareness describes her experiences with seizures and epilepsy over 20 years.  After a diagnosis of epilepsy in her teens, Kristin lived in constant fear that her seizures would intensify and prevent her from practicing medicine. She kept her condition a closely-guarded secret, leading a tenuous double life as patient and practitioner - until now.

Kristin Seaborg chronicles her journey in her newly-published memoir, The Sacred Disease, with the hope that writing about her disease will build public awareness and decrease the stigma associated with seizures.
by Carol Koby at 7:08 AM